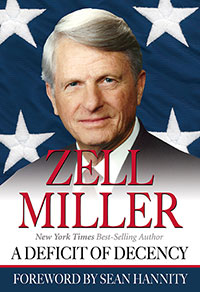 In February of 2004, Senator Zell Miller delivered the speech, “A Deficit of Decency”, on the Senate floor. The speech considered the very soul of America, and generated an unexpectedly massive response from people across the nation.

Expanding on this theme in his new book by the same title, former U.S. Senator and Georgia Governor Zell Miller identifies a wide range of issues—from media and sports role models, to the judiciary, to the decline of traditional Christian values of the family, responsibility and sacrifice—where an absence of decency is threatening the heart of America.

A Deficit of Decency addresses specific issues where Miller sees a need to a return to a basic sense of duty. Miller writes in the preface, “There have been ten generations of Americans since this nation was founded. …Each left this nation in a little better condition than they had inherited it from their parents. This is the first generation at risk of doing the opposite. Why? I have come to believe that it is because we failed acknowledge and discipline ourselves with the spiritual truths that have made us great for these two hundred years—faith, family, country, values. This book is about how one man thinks they may be restored and yet save this great civilization from itself.”

In A Deficit of Decency, Miller also speaks candidly about the values that led him to attack his own party and deliver a keynote speech at the 2004 Republican National Convention. These same values, he believes, are desperately needed at the heart of American culture. Miller explains, “There were two primary reasons I could not go where my lifelong political party wanted to take me. I seriously questioned its judgment on how to respond to the threat of terrorism, the most serious national security issue of the post Cold War era. But I also came to be repelled by the secularism that had engulfed its thinking and smothered its soul.”

Miller writes from the unique perspective of his rise to and service as Governor and United States Senator, drawing upon public service in each of the past six decades. Miller has written six books, including Corps Values, and the New York Times bestseller A National Party No More.