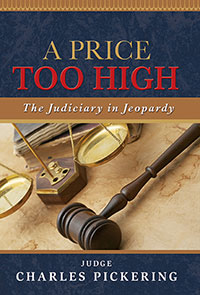 This unprecedented battle for supremacy of the federal courts threatens the quality, independence, diversity, and integrity of the American judicial system, and wreaks havoc in the personal lives of judicial nominees. It erodes civility and collegiality in the Senate, creating roadblocks preventing senators from discharging their responsibilities to the American people. It reduces the number of qualified candidates willing to run the gauntlet of the confirmation process. The politicization of the judiciary threatens our democratic processes, our separation of powers, and the rule of law as envisioned by our founders.

A Price Too High, a follow-up to Supreme Chaos, presents Pickering’s personal fight for judicial confirmation. In the book, he reflects on his odyssey through the confirmation debacle and suggests solutions he believes will benefit the nominees of any party, strengthen the independence of the federal judiciary, and fortify our nation’s commitment to the rule of law.

Judge Pickering is married to the former Margaret Ann Thomas. They have three daughters, Paige Dunkerton, Allison Montgomery, and Christi Chapman, and one son, Congressman Chip Pickering. They have twenty-one grandchildren.