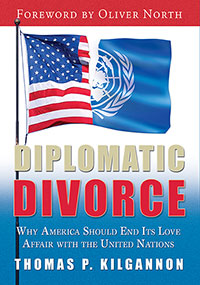 In this bold and provocative new book, Diplomatic Divorce, Tom Kilgannon argues that failure to understand the United Nations and the motivations of the people who run it imperils not only America’s international sovereignty but ultimately America’s independence. Kilgannon, who has reported from UN events around the world, provides an eye-opening look at how a corrupt haven of second-rate bureaucrats from third-world countries is dictating the future of the world’s only superpower—and leading us down the road to ruin.

In Diplomatic Divorce, Kilgannon contends that the United Nations—with the help of international, anti-American lobbyists—is assaulting American values on a number of fronts, from national security to trade to tax policy to the Internet. Our First Amendment is under attack from UN bureaucrats who are trying to wrest control of the Internet from the United States. Global gun-grabbers have our Second Amendment in their crosshairs as they work toward an international Arms Trade Treaty which will ban the private ownership of firearms. Kilgannon shows how despite President Bush’s work, members of America’s military are still in jeopardy of being tried before Kofi Annan’s International Criminal Court and how Congress has outsourced its constitutional responsibility to the World Trade Organization.

Leading Democrats like Jimmy Carter, Bill Clinton, John Kerry and others, Kilgannon explains, “have abandoned their faith in America for the empty promises of a global cult…which is hopelessly corrupt, inherently flawed and anti-American to the core.” These apostles of universal law have hung our Constitution on the discount rack. For these reasons and more, he argues, “it is time for America to end her love affair with the United Nations.”

Thomas P. Kilgannon is a leading authority on the United Nations, international institutions, and American sovereignty. He has closely monitored UN activities and reported from international conferences held in Monterrey, Mexico; Johannesburg, South Africa; and New York City. He currently serves as the President of Freedom Alliance, an educational and charitable organization dedicated to preserving the American heritage of freedom and providing support to our men and women in uniform.

Before joining Freedom Alliance, Kilgannon served as a top aide to Congressman Mark Neumann of Wisconsin, one of the most visible and effective members of the historic freshman class of 1995. Prior to that, he coordinated policy and communications for the Christian Action Network, a pro-family lobbying organization, and served as deputy press secretary for Patrick J. Buchanan’s 1992 presidential campaign.

He is a graduate of New York University where he studied economics. He has appeared on CNBC, MSNBC, FOX News, CNN International, and Court TV, as well as numerous nationally syndicated radio programs. Kilgannon is also the host of the Freedom First radio program on the Rightalk Network. Diplomatic Divorce is his first book.