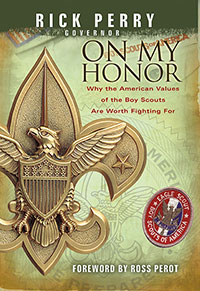 In On My Honor, Texas governor Rick Perry, through the legacy of the Boy Scouts of America, takes dead aim at the moral relativism of the secular humanist movement, indicting its corrosive impact on the culture. Examining the left’s legal assaults on the Boy Scouts of America – which span more than 30 years – Perry offers prescient insight into the multi-faceted war, which pits the proponents of traditional American values against the radical leftist movement that seeks to tear down our social foundations.

On My Honor underscores the depth to which the culture warriors of the left will go to force their secular humanist minority view upon American society and revered American institutions. It is a revealing look at a culture war that rages close to the surface of American life, and it is a must read for any American concerned that our society is slipping from the high moral ground of liberty to the valley of license.

Rick Perry, currently the governor of Texas and Presidential Candidate, wrote On My Honor to shed a bright light on the culture battles the Boy Scouts face defending America’s values. As an Eagle Scout and the proud father of an Eagle Scout, Perry has witnessed first hand the positive impact Scouting has had in the lives of countless Gov. Perry will sign book in Woodvillefamilies. The onslaught by the secularists, lead by the ACLU, has been relentless and has long term negative ramifications for all Americans. This is Governor Perry’s first book. He resides in Austin with Anita, his wife of 25 years, and his daughter, Sydney. His son, Griffin, lives and works in Dallas. All net proceeds from this book go directly to the Boy Scouts of America.