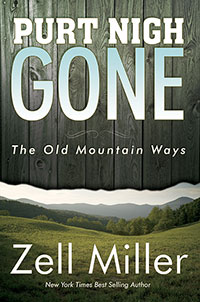 Purt Nigh Gone: The Old Mountain Ways, the latest book by New York Times best-selling author, former U. S. senator and Georgia governor Zell Miller, is about a way of life that once was, but is no more. Time has taken its toll on much of the unique Appalachian mountain culture. Only a remnant now remains.

“Purt nigh gone”…or “pretty near gone”…is the region’s disappearing dialect, swallowed up by exposure to mass media popular culture. Nearly gone as well is the area’s traditional music, its food, its old-time religion, its humor, and even its moonshine.

While considering these fading treasures, this book also looks at the Appalachian mountains in their prehistoric times, when they rose higher than the Rockies, at the Cherokees and their removal, at the nation’s first gold rush, and at the timeless question of whose mountains these truly are.

Finally, Zell Miller leaves us with 101 good reasons for living in these mountains today. But after reading through these remembrances of a time “purt nigh gone,” you will hardly need them. These mountains will feel like home already.

Zell Miller began his career in public service in 1959 with a term as mayor of Young Harris, Georgia. In 1960, he was elected to the Georgia Senate at the age of 28. In 1974, he won the first of four consecutive terms as Georgia’s lieutenant governor. Then in 1990, Miller ran for governor and won the first of two terms he would serve as the state’s top leader. From 2000 through 2004, he served as a United States Senator for the state of Georgia.

After a lifetime of politics, teaching, speaking, and writing, including two New York Times best sellers, Zell Miller and his wife Shirley retired to his home in Brasstown Valley in the mountains of North Georgia. His books include The Mountains Within Me, A National Party No More, A Deficit of Decency, and The Miracle of Brasstown Valley.