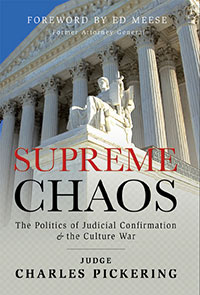 The judicial confirmation process is in a state of chaos. America’s culture war has set the stage for a power struggle reaching to the highest court in the land—the Supreme Court. Integrity and ability are no longer the criteria for evaluating the caliber of a judge. Rather it is one’s position on hot-button social issues. Without control of the White House, the House, or the Senate, the Left looks to liberal activist judges rather than to the American voters or their elected representatives to create new rights. Americans who believe in the rule of law must understand and challenge the liberal notion of a “living Constitution,” which has politicized the judiciary and provoked today’s confirmation battles.

We are witnessing not only the testing of the judicial nomination system but a downward spiral in civility within the U.S. Senate. Nominees endure partisan conflict rather than a dignified and respectful legislative process. Liberal special-interest groups degrade confirmation proceedings into bitter character assassinations that malign the reputations of nominees. During his confirmation process, Judge Charles Pickering waited years to be confirmed and was ultimately forced into retirement by a Democrat minority unwilling to give him the decency of an up-or-down vote on the Senate floor.

In Supreme Chaos, Judge Pickering, who faced unprecedented use of the filibuster by Senate Democrats, provides an insightful assessment of the situation and argues that we must find a way out of the quagmire for the sake of the judiciary, our children and grandchildren, and the rights of all Americans. Pickering’s vision of a repaired confirmation process offers hope that order can be restored from the chaos—that justice under the rule of law as established in the Constitution will prevail.

Judge Pickering is married to the former Margaret Ann Thomas. They have three daughters, Paige Dunkerton, Allison Montgomery, and Christi Chapman, and one son, Congressman Chip Pickering. They have twenty-one grandchildren.