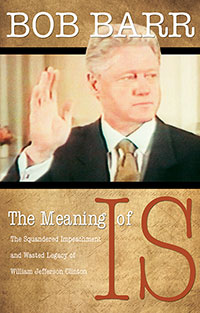 Bob Barr (the man behind the so-called “vast right wing conspiracy”) shares his judgment on the Clinton legacy. His new book clearly highlights the shocking depth of corruption that characterized Clinton’s administration. Proving his reputation as Clinton’s worst nightmare, Barr reveals previously unknown details of the impeachment process; describing how its scope was artificially limited and its progress politically undermined by both Democrats and Republicans.

Barr writes, “Looking back on the Clinton administration from the perspective of someone who was personally involved in investigating basically every public corruption case raised against Clinton, I am most amazed that the Monica Lewinsky case is ultimately what got the president impeached. This is not to say that lying under oath and obstructing justice are not impeachable charges or that the remedy we chose was inappropriate. However, these charges pale in comparison to the systematic damage Bill Clinton did to American national security, the office of the presidency, and the civil liberties of individual American citizens.”

Barr writes, “Bill Clinton will go down in history as a failed president, because he had the intelligence and opportunity required for greatness, but suffered from fundamental character flaws… There is no core to Bill Clinton, no principle he will not sell out, no lie he will not tell, no rule he will not break, if he believes doing so will best serve his immediate interests.”

Former congressman BOB BARR (R-GA) rose to national prominence by introducing to the House of Representatives the initial articles of impeachment of President Clinton. Bob Barr represented the 7th District of Georgia in the U. S. House of Representatives from 1995 to 2003, serving as a senior member of the Judiciary Committee. He helped lead some of the most important oversight hearings in the House, on the Judiciary Committee, as Vice-Chairman of the Government Reform Committee, and as an eight-year veteran of the Committee on Financial Services. Bob Barr occupies the 21st Century Liberties Chair for Freedom and Privacy at the American Conservative Union, and is a Member of the Long-Term Strategy Project for Preserving Security and Democratic Norms in the War on Terrorism, at the Kennedy School of Government at Harvard University. He also provides advice to several organizations, including consulting on privacy issues with the ACLU, and is a member of the Legal Advisory Board for Southeastern Legal Foundation.

Bob is a Contributing Editor for The American Spectator, has served as a commentator for CNN, and appears frequently as a guest on various television news and opinion shows. Bob is host of a weekly radio show on the Radio America network, broadcast in media markets across the country, titled “Bob Barr’s Laws of the Universe.” His writings have appeared in numerous academic, local, regional, and national publications, and he writes regularly for UPI and Creative Loafing. He currently serves Of Counsel with the Law Offices of Edwin Marger, with a national and international practice in both civil and criminal law. He is a board member with the National Rifle Association.